Are you looking for

Arbitration resolves your dispute without having to go to court

Arbitration is an effective way of resolving commercial disputes privately, without the need to go to court. Arbitration can be quicker, easier and less costly than going to court.

Arbitration involves each party to a dispute giving their side of the story to a neutral third person called an arbitrator. The arbitrator then makes a decision called an Award, which is final and binding on all parties to the dispute.

The Victorian Commercial Arbitration Scheme (VCAS) provides Rules for arbitrating to resolve disputes quickly and affordably without going to court. VCAS arbitrators are accredited with the Chartered Institute of Arbitrators or the Resolution Institute or they are experienced arbitrators who have demonstrated excellence in the field of domestic and/or international arbitration.

Most commercial disputes, big or small, can be resolved by arbitration and the Commercial Arbitration Act 2011 (Vic) provides for enforcement of arbitral Awards in court if needs be.

Do you have an existing dispute?

Both parties need to agree to have the dispute referred for VCAS. To formally do so, the parties need to complete and sign the VCAS Dispute Referral Notice in paragraph 5.2 of the VCAS User Guide.

Once both parties have signed the Referral Notice, the applicant can commence the arbitration under the VCAS Scheme by registering the case using the form here.

Contractual provision to use VCAS for future disputes

You can agree in your contract to resolve future disputes by arbitration by VCAS. A sample clause to insert into your contract is outlined in Paragraph 3.1 of the User Guide

Can your matter be heard under VCAS rules? 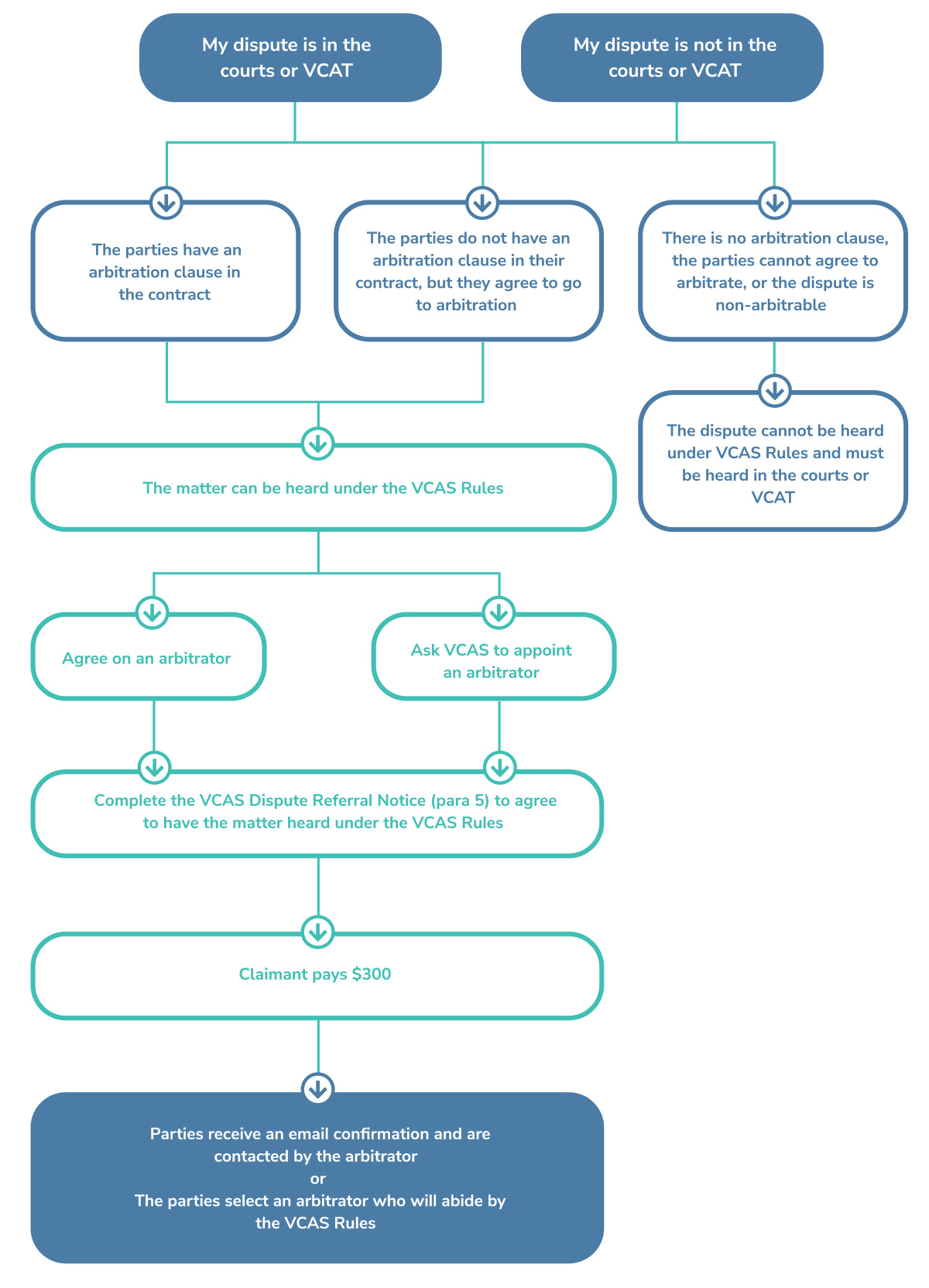 Under the VCAS Rules, you can expect to have the arbitration heard and an Award made within either 90 or 120 days from the start of the arbitration. If the matter is particularly complex, cases may need more time, and this will be agreed with the parties. Some cases are simpler and may take less time.

A sample clause for those wishing to elect for a “Documents-Only” arbitration is outlined in Paragraph 3.2 of the User Guide

Choose your own VCAS arbitrator

Parties may choose an arbitrator from the list provided by VCAS or if they cannot agree on the individual, request the VCAS governance panel to appoint an arbitrator for them.

Parties are not restricted to choosing an arbitrator from the VCAS list. However, if the parties wish to choose someone not on the list as their arbitrator then the parties will need to liaise directly with that arbitrator and agree with him or her that the VCAS Rules will apply.

Arbitrators’ fees are fixed and capped, so there are no hidden extras. See the current VCAS Scale of Fees.

A claimant pays VCAS a $300 fee to initiate arbitration under the scheme.

For more information about arbitration and the VCAS, please visit our FAQ page here.

VCAS is endorsed by